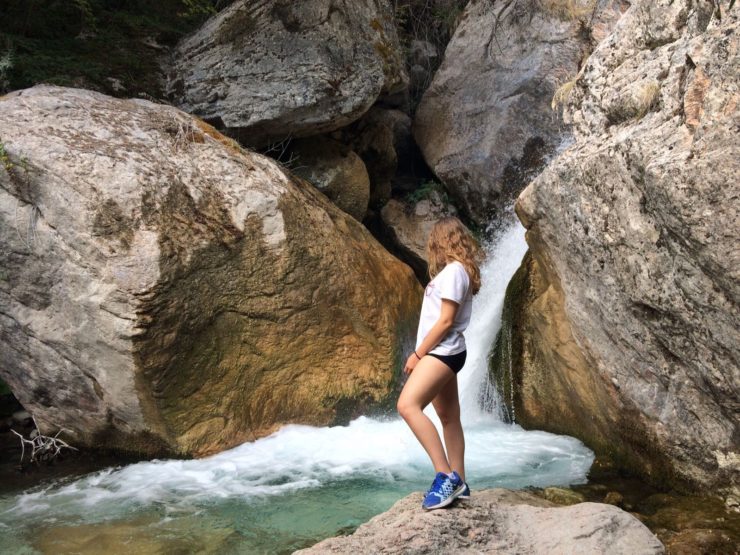 On the second day of our weekend in the mountains we we dismantled the tent and left the camping which had gifted us a fresh and night relaxing night. We took our way home with the intention to stop somewhere along the road. The first stop was the sanctuary of Madonna dell’Ambro, which is still located within the municipality of Montefortino. This sanctuary was built in the XI century after a miracle happened nearby: in this place the Virgin appeared to a little shepherdess called Santina in the year 1000. The little girl, who was dumb since her birth, recovered the gift of speech after the many offerings and prayers made to the Virgin. This sanctuary is also called “The Lourdes of Sibillini” because of the many similarities with the French sanctuary: both are situated in the middle of the mountains and near a river, and the stories of the two miracles are very similar. Unfortunately this sanctuary was also damaged from the earthquake so it was close to the public. Anyway we remember from a previous visit to this place, that inside the church there is a wall on which the faithful can write and hang prayers to the Virgin. This place is also very pleasant to spend a day with family and friends: the sanctuary is located on an esplanade by the Amber stream, and it is fantastic for a pic-nic by the river. You can both relax and take advantage of the coolness emanating from the stream or choose to go on an adventure by following the numerous paths that lead into the woods, skirting and crossing the stream. Without any difficulty we followed a path that led us to a small and picturesque waterfall. We would have loved to stay and relax but we had to do another stop before we got home and it was getting late.

We let Madonna dell’Ambro and we head for Sarnano, passing through the city of Amandola. Just before arriving in Amandola we saw a sign with the word “Honey” on the edge of the road, and we turned following the arrow. Not far from the main road we found the Colibazzi company, a family of beekeepers from Amandola who produces many varieties of excellent honey. We stopped to chat with the very nice owners, and we have, perhaps for the first time, seen in their eyes the fear of the earthquake still alive, and the great sadness for the damage caused to the local economy. Continuing on our way we again made a detour to San Ginesio, where we stopped for lunch. San Ginesio is bigger than the other hamlets we presented befor, it has indeed nearly 3000 inhabitants situated in the province of Macerata. Since the hamlet is quite high, you can enjoy a beautiful panorama that ranges from the Conero to the Sibillini, for this reason it is called “the Balcony of the Sibillini“. After eating in the shade in a beautiful park, we entered the town through the ancient walls. Even there the traces of the earthquake are still visible and do not allow to fully appreciate the beauty of the city.  Furthermore, being two p.m. on Monday afternoon, we found the country almost deserted, and the tiredness and the heat pushed us to resume the journey home, reluctantly postponing the visit of the square and the rest of the village. A very particular thing that we had never seen before and that has conquered us is a park just outside the walls. It is dedicated to those killed in the war and has a basilica shape, in which the trees replace the columns and are dedicated to the soldiers, to symbolize the immortality of their sacrifice. It is an extremely symbolic place which in its simplicity gives a feeling of eternal solemnity, and is truly touching.

We have already reached the end of our weekend out of town, promising to return to visit these magical places and with the intention of doing everything possible to help the reconstruction of these areas. Despite the recent significant moral (and not only moral) challenge they faced due to the seismic swarm that hit these areas in the second half of last year, these small, but very characteristic, villages will be able to fill your heart with their hospitality and sympathy, and for this they deserve all our solidarity. If you want to discover them too, perhaps even helping them financially, we advise you to treat yourself to a weekend in these places in October, when you can participate in a different festival every Sunday. Most likely we will go back and recommend you the best parties and the best hotels to stay.